Sintra is a city and municipality in the Greater Lisbon region of Portugal, located on the Portuguese Riviera. Sintra is a major tourist destination in Portugal, famed for its picturesqueness and for its numerous historic palaces and castles. Sintra is also a major luxury dining and tourism destination within the Portuguese Riviera, as well as one of the wealthiest municipalities in the country, and is known for the numerous notable events hosted in Sintra, such as Bilderberg Meetings and the Open de Portugal.
The historic centre of the Vila de Sintra is famous for its 19th-century Romanticist architecture, historic estates & villas, gardens, and numerous royal palaces & castles, which resulted in the classification of the town and its historic passage as a UNESCO World Heritage Site. Sintra is similarly known for its numerous gardens and nature parks, including the Sintra-Cascais Nature Park and the Sintra Mountains. Sintra's most iconic landmarks include the mediaeval Castle of the Moors, the romanticist Pena National Palace and the Portuguese Renaissance Sintra National Palace.
Sintra is consistently ranked as one of the wealthiest and most expensive municipalities in both Portugal and the Iberian Peninsula as a whole. Sintra is one of Portugal's most expensive and sought after real estate markets, famed for its numerous historic villas, luxury estates, and Michelin star restaurants, and is home to one of the largest foreign expat communities along the Portuguese Riviera. Sintra is similarly known for its high standards of living, consistently ranking as one of the best places to live in Portugal.

The Castle of the Moors is a hilltop medieval castle located in the central Portuguese civil parish of Santa Maria e São Miguel, in the municipality of Sintra, about 25km northwest of Lisbon. Built by the Moors in the 8th and 9th centuries, it was an important strategic point during the Reconquista, and was taken by Christian forces after the fall of Lisbon in 1147. It is classified as a National Monument, part of the Sintra Cultural Landscape, a UNESCO World Heritage Site.

The Pena Palace is a Romanticist castle in São Pedro de Penaferrim, in the municipality of Sintra, on the Portuguese Riviera. The castle stands on the top of a hill in the Sintra Mountains above the town of Sintra, and on a clear day it can be easily seen from Lisbon and much of its metropolitan area.

The Palace of Sintra also called Town Palace is located in the town of Sintra, in the Lisbon District of Portugal. It is a present-day historic house museum.
It is the best-preserved medieval royal residence in Portugal, being inhabited more or less continuously from at least the early 15th century to the late 19th century. It is a significant tourist attraction, and is part of the cultural landscape of Sintra, a designated UNESCO World Heritage site. 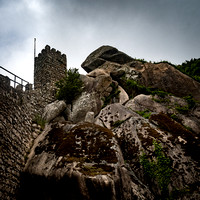