Located along the Douro River estuary in northern Portugal, Porto is one of the oldest European centres, and its historical core was proclaimed a World Heritage Site by UNESCO in 1996. The western part of its urban area extends to the coastline of the Atlantic Ocean. Its settlement dates back many centuries, when it was an outpost of the Roman Empire. Its combined Celtic-Latin name, Portus Cale, has been referred to as the origin of the name Portugal, based on transliteration and oral evolution from Latin. In Portuguese, the name of the city includes a definite article: o Porto. Consequently, its English name, Oporto, evolved from a misinterpretation of the Portuguese pronunciation.
Port wine, one of Portugal's most famous exports, is named after Porto, since the metropolitan area, and in particular the cellars of Vila Nova de Gaia, were responsible for the packaging, transport, and export of fortified wine. In 2014 and 2017, Porto was elected The Best European Destination by the Best European Destinations Agency. Porto is on the Portuguese Way path of the Camino de Santiago.

The Porto Cathedral is a Roman Catholic church located in the historical center of the city of Porto, Portugal. It is one of the city's oldest monuments and one of the most important local Romanesque monuments.
Unlike what's often written, the current Cathedral of Porto was not built under the patronage of Bishop Hugo since the pre-Romanesque church is still mentioned in the De Expugnatione Lyxbonensi as still extant in 1147.
This means the present building was only started in the second half of the century and it would be constantly under works well until the 16th century (without counting later Baroque and 20th century interventions), but there is evidence that the city has been a bishopric seat since the Suevi domination in the Sth-6th centuries.
Around 1333 the Gothic funerary chapel of Joao Gordo was added. Joao was a Knight Hospitaller who worked for King Dinis I. His tomb is decorated with his recumbent figure and reliefs of the Apostles. Also, from the Gothic period is the elegant cloister, built between the 14th and the 15th centuries during the reign of King John I, who married English Princess Philippa of Lancaster in Porto Cathedral in 1387.
The external appearance of the Cathedral was greatly altered during Baroque times. In 1772 a new main portal substituted the old Romanesque original and the tower cupolas were altered. In 1736 Italian architect Nicolau Nasoni added an elegant Baroque loggia to the lateral facade of the Cathedral. 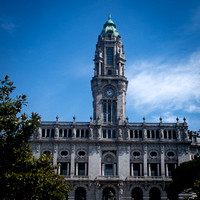 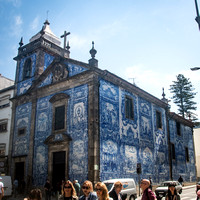 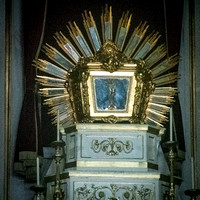