Guimaraes is a city and municipality located in northern Portugal, in the district of Braga. Its historic town center is listed as UNESCO World Heritage Site since 2001, in recognition for being an "exceptionally well-preserved and authentic example of the evolution of a medieval settlement into a modern town" in Europe.
The city was settled in the 9th century, at which time it was called Vimaranes. This denomination might have had its origin in the warrior Vfmara Peres, who chose this area as the main government seat for the County of Portugal which he conquered for the Kingdom of Galicia.
Guimaraes has a significant historical importance due to the role it played in the foundation of Portugal. The city is often referred to as the "birthplace of the Portuguese nationality" or "the cradle city" because it is widely believed that Portugal's first King, Afonso Henriques, was born there, and also due to the fact that the Battle of Sao Mamede - which is considered the seminal event for the foundation of the Kingdom of Portugal - was fought in the vicinity of the city.
For some decades, Guimaraes was the capital of the County of Portugal, however, shortly after the Battle of Sao Mamede (1128), and due to the needs of the Reconquista, Coimbra became the kingdom's capital.
The inhabitants of Guimaraes are often called "Vimaranenses" and "Conquistadores" (the Conquerors) in relation with the historical heritage of the conquest initiated in Guimaraes.
Guimaraes, along with Maribor, Slovenia, was the Europe­ an Capital of Culture in 2012.


The Castle of Guimaraes is the principal medieval castle in the municipality Guimaraes, in the northern region of Portugal. It was built under the orders of Mumadona Dias in the 10th century to defend the monastery from attacks by Moors and Norsemen.
The castle is a military fortification grounded primarily in the late Romanesque period and elaborated during the early Gothic epoch of Portuguese architecture. Its area is delineated by walls forming a pentagram, similar to a shield, that includes eight rectangular towers, military square and central keep. Originating in the foundations of a Roman structure, from the writings of Alfredo Guimaraes, it was later elaborated on the French model, in its current the form of a shield, with reduced central yard and difficult accesses. It includes several Gothic characteristics, owing to its remodeling at the end of the 13th century, when the keep and residences were constructed (possibly over pre-existing structures).


The Palace of the Dukes of Braganza is a medieval estate and former residence of the first Dukes of Braganza, located in the historical center of Guimaraes (Oliveira do Castelo), in the north-western part of Portugal.
It was initiated between 1420 and 1422 by Afonso, Count of Barcelos, the illegitimate son of John I of Portugal (and future Duke of Braganza), after his marriage to his second wife. His prodigy would occupy the space until the Dukes of Braganza moved to Vila Vicosa, abandoning the palace. The 16th Century marked the beginning of period of ruin, which was aggravated during the 19th century, when the local population used the palace as a personal quarry. During the Estado Novo regime, a controversial restoration restored the Palace, while implying a grandeur that may not have existed. The Palace of the Dukes was classified as a National Monument (Portuguese: Monumento Nacional) in 1910, and has been an official residence for the Presidency. 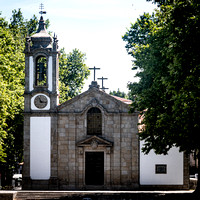 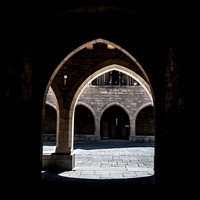 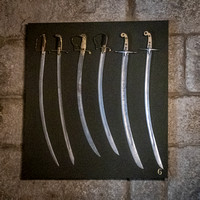