Although a small town, Tomar plays a large role in a very important stage of Portuguese history, with links to the Knights Templar and the Discoveries, and remains an attractive and interesting place to visit.
Its story begins in the eleven hundreds when much land in the area was donated to the Knights of the Temple of Jerusalem by the then Queen Dona Teresa and her son Dom Alfonso Henriques. Upon this land the Master of the Order of the Temple, Gualdim Pais, instigated the building of a castle which would continue to grow in size and grandeur throughout the ages until the 17th century. Legend tells us that the position of the castle, and indeed its name, came to the Templars in a vision upon their arrival in the area.
The castle and the Knights of the Order served to defend the center of Portugal from attack and invasion, and often they were besieged, but by the 14th century there was a movement throughout Europe to ban the Templars and so came about the extinction of the Order. However, they continued to be supported by the Portuguese royals and so in 1319 Dom Dinis eventually succeeded in negotiating with the Catholic powers the establishment of the new Order of Christ, which would basically take over from where the Templars left off, with the same people, property and privileges. It was this Order which worked alongside Henry the Navigator in the 15th century and whose knowledge and financial backing aided his voyages of discovery. The knights became explorers in their own right with a remit to extend Portuguese influence in the world and to spread Christianity to these new lands.


Fatima is a town and Parish located 142 km (88 miles) North of Lisbon. Fatima is one of the most important catholic shrines in the world dedicated to the Virgin Mary. Fatima's Sanctuary welcomes millions of pilgrims and tourists from all over the world. Fatima's fame is due to the Apparitions of Our Lady of the Rosary that appeared to three shepherd children; Lucia dos Santos and her two younger cousins, Francisco and Jacinta. Between May and October of 1917, the three children witnessed several apparitions. The last one, on October 13th, was confirmed by a miracle witnessed by 60,000 people known in the catholic world as "the day the sun danced".
Fatima now attracts thousands of pilgrims from all over the world, particularly on the pilgrimage days in May and October. The large torch-light processions in the evening are particularly impressive, often lead by Cardinals and Bishops. The pilgrims gather in Cova de lria an enormous plaza where a little chapel was built and where the Virgin Mary is believed to have appeared to the children. Around the plaza are a considerable number of shops and stalls selling various religious articles. On the far side of the plaza rises the great basilica, built in the in neo-classical style, with a central tower 65 meters high, the construction of which was begun on 13 of May 1928. It is flanked by colonnades linking it with the extensive convent and hospital buildings. In the basilica are the tombs of two of the three visionaries, siblings Francisco and Jacinta Marta, who died in 1919 and 1920 respectively, and were beatified in 1970. The third seer, Lucia dos Santos, died in 2005.


Pegadas de Dinossaurios de Ourem/Torres Novas Natural Monument (Dinosaurs Footprints of Ourem/Torres Novas) on the Bairro settlement in the eastern extremity of the Aire mountain ridge, right in the middle of the Serras de Aire and Candeeiros Nature Park is an important ichnofossil record of the Jurassic period. In that period, during the separation of the great continental massif - Pangea - which originated the formation of the current continents, there were shallow marine extensions, and a tropical climate dominated, warm and moist. The existing vegetation allowed the proliferation of herbivore dinosaurs, such as the sauropods who left footprints in the thin layer of limestone mud existing in the shallow marine ponds. Later, the mud dried, buried by limestone sediments which ended up transforming into rock. In the limestone slab of this Natural Monument the dinosaur footprints have been preserved through 175 million of years and can now be seen in 20 trails or tracks from which the longest one - 147 meters long - is the longest sauropod track known to date.
Dinosaur - from the word dinosauria, created by a scientist to designate a group of organisms that today only exist fossils. Dinosaur comes from the Greek “deinos” meaning "astonishing, terrible, dangerous, hideous" and "sauro" meaning "lizard".
lchnofossil or ichnite - from the Greek iknos meaning trace. In fact, it is a fossil trace of organisms' activity that existed in the past (footprints, travel tracks, droppings, eggs and fossilized teeth marks are examples of ichnites).
Jurassic - geological period in which the dinosaurs dominated and the development of vegetation was abundant. It lasted about 54 million years, roughly between 208 to 144 million years ago. 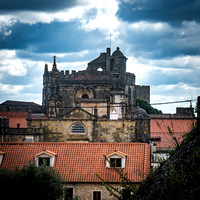 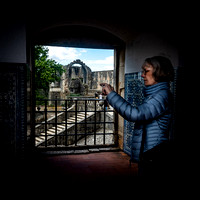 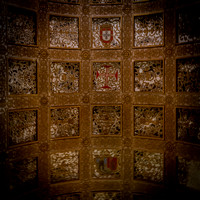 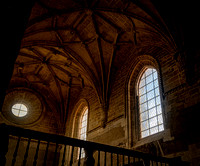